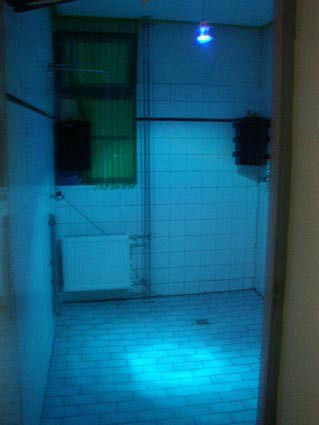 Iris van Bebber was honored to be invited by Extrapool to take part in their exhibition "Destillaat 10".

In addition to their print business, Extrapool presents an internationally-renowned audio arts and improvised music program at their space in Nijmegen (NL). In the preparation of her piece, Iris considered how she might make a sound distillation of the space itself.

She was able to benefit from her personal experiences at the venue which date back many years, but she was also motivated by a feeling that she has about space in general: the notion that a place stays more or less the same, even as time passes by.
Even a place as vibrant and evolving as Extrapool is more or less static in opposition to the actions which occur there, the sound and pulsations of life that happen on, and in and around it, and which are ephemeral.
Certainly the look / appearance / structure of a place will alter over time, and is modified by the things that happen in it while the quintessential space / place, its core, stays the same. Yet somehow, its essence -- an atmosphere -- is contained and endlessly absorbed, like a data carrier of all the action and the sound that has happened ON / IN it during the time passed and still passing by there.

Iris decided to try to catch this force of movement and change taking place in a static environment.

With the help of Extrapool she asked a number of international sound-artists to contribute sound-recording excerpts from their performances at Extrapool. To her, these sound-pieces were synonymous with the fruit that is used in the fermentation process: modifying, editing and composing these raw sound-materials into a new piece of work had much in common with the distillation-process of must into liquor or wine.

And so, distillation became instillation: Iris extracted the sound-information grown in the atmosphere at Extrapool into the audible form of a four channel sound-sculpture.
Also the result was mixed down to stereo and was released on CD in a limited edition by Extrapool. The sound artists who contributed material for this piece received a CD in return for their cooperation with her efforts.

(written by Robert Dennis - the tension headache studio)
____________
Frans de Waard (staalplaat, vital weekly) wrote a review about the CD,
You can read it here