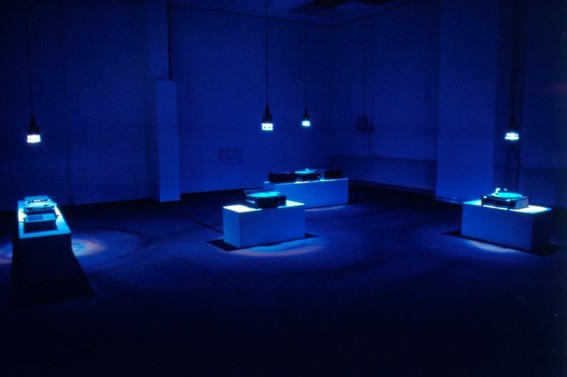 With this installation Iris van Bebber sought to create an environment where elements rooted in different fascinations could intersect. In a sense it is almost like a very strong cocktail, but one into which the viewer pours their entire body (in this case, by walking into a room) rather than the other way around.

The inspirations for this cocktail are performance, vinyl records, and sex - but those are not exactly the ingredients used to mix it. In fact, the recipe calls for metal, amplification, and light.
Experimental etchings based on a series of woodcuts began the train of thought that eventually led to the creation of "soundbodies - oder: wohin führt ein kreis".

Inspired by her love for phonograph records, she saw that the plates used to produce the etchings could also be an analog sound production source. The topography of the plate's surfaces is one of ridges and grooves, in some ways not unlike those found on vinyl pressings. It occurred to her that the plates could be "listened to" by using a phonograph tone arm, cartridge, and needle to translate this topography into waveforms, just as is done with vinyl records.

Her fascination grew when she heard the sound made by the plates. The same imagery, tension, and movement that the plates had also transferred to paper was filling the room. The plates generate complex sounds: a deep and throbbing undercurrent that has a unique rhythm -- strongly insistent and undeniable -- like the movement of two bodies in passion, or that of blood hotly pulsating. The plates also emit mid- and high- frequency sounds that have striking similarities with the sounds of breathing, whispering and shrieking. 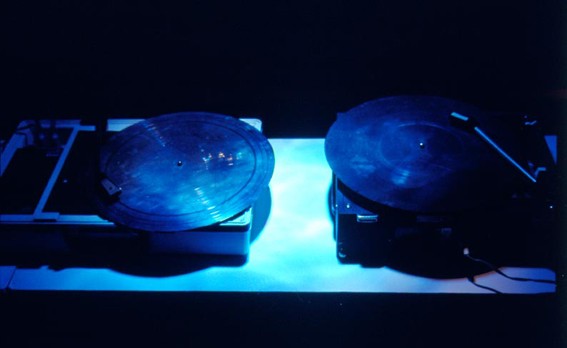